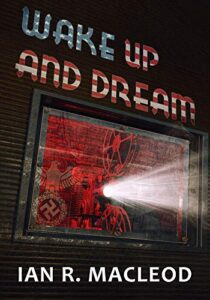 The career of has-been actor, Clark Gable, didn’t make the jump from the talkies to the “feelies.” Now he’s a two bit private eye specializing in matrimonial cases, sniffing pillow cases and peering under beds. But a fresh case drags Clark back into acting and to the dark side of the technology underlying the feelies, the mysterious Bechmeir Field.

The average citizen craves to escape the Great Depression in the dream of the feelies. But Clark’s skin crawls whenever he’s in the cinema. And the technology may have other uses in politics and advertising capable of drifting the United States closer toward fascism and collusion with Nazis. Can Clark Gable, unlicensed private eye, solve the case, save his own life, and prevent a socio-political disaster?

In my last review, I criticized “celebrity cameos” in alternate history as disruptive and self-indulgent. But while players from Hollywood’s Golden Age appear in Wake Up And Dream, the celebrity characters are integral to the plot or provide plot-relevant information, so the scenes in which they’re featured don’t read as forced. And since the era is so remote, their fame is remote. Sometimes very remote, so a reader might not even recognize a celebrity. For instance, I’d never heard of Peg Entwistle, an actress who committed suicide in 1932 by jumping from the famous Hollywood sign.