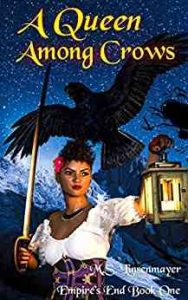 1908-Russia: A scrappy intelligence officer from war torn North America hires herself out as a mercenary in the service of Catherine the Great. Both women are “Queens,” descendants of the Gods possessing certain powers. Eryma communes with crows, and her birds provide reconnaissance and protection. Though bashed, battered and covered in tread marks, she plans to help recover a crash-landed asteroid in exchange for eternal youth. But both Catherine’s court and Eryma’s plans are suffused with intrigue.

A complex series of events ensues laced with historical distortions, magic, monsters, blood, gore, and a steam punk feel. The plot unfolds gradually, and Eryma’s intentions and history are delivered in bits and pieces, leaving room for reveals and plot twists. And the novel excels in characterization, including Eryma who’s battered but tough and resolute with a goofy sense of humor.

“Other women may have had beauty, class and romance; I had wit, experience, and explosives. The latter, in my experience, solves more problems than romance does.”

Grim, hard-living, violent, and lusty Dame July provides a frenemy-romance, and several acts of savagery. And Eryma’s crow community includes both a corvid genius and a comedian.

“So, if I am dead, which religion was correct?” I mused aloud.

“Yog-Slaggoth,” Lois stuck her head through the drapes “The Elder tentacled on is coming to dine on us later. Please be properly shaved, greased, and seasoned by five.”

If you’re after diversity, banter, wordplay, action, and strong female characters, A Queen Among Crows is your book. However, please observe the CLIFF HANGER WARNING sign and don’t tumble off at the end of the novel. Stand alone readers may be disappointed. On the bright side, several additional volumes of this series are already out and available.