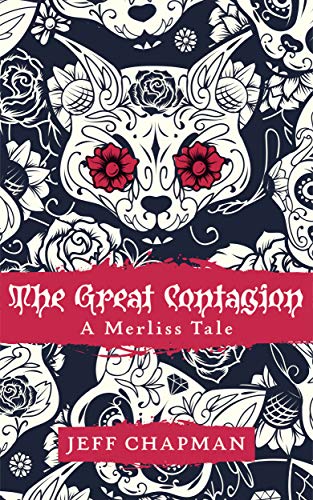 Jeff Chapman’s medieval fantasy, The Great Contagion, lies somewhat outside my usual reading preferences. However, possession is one of my literary interests, and the novel covers a distinct possession, the well-known human into animal transfer. Hate it when that happens.

The novel’s main character is Merliss, the soul of a shaman-in-training possessing the body of a cat. She’s lived in the cat for centuries, assisting healers and training their apprentices, so she wears her possession comfortably, like an old shoe. And she’s seen plenty of drama in her long life, but nothing like The Great Contagion.

A plague descends upon the humans; they die in droves and/or behave rather badly. Concurrently, Merliss’s second home, the magical forest, faces unprecedented challenges. Attempting to help her animal, magical and human friends divides Merliss’s loyalties.

Liking Merliss was difficult at first. She read as a grumpy old lady. The initial chapter, a walk through the woods with an annoying young man almost lost me.

But how you travel is more important than your destination.

But the lovely prose kept me reading, then Merliss’s loyalty and bravery shone through her grousing, and the story grabbed me. In fact, I finished the book in two sittings, one lasting until one in the morning, an easy read given the book’s flawless editing and production, and high-grade prose.

My only quibbles are with the first chapter, as mentioned above, and the humans, who are, as in much Medieval fantasy, an uninspiring bunch. And she felt loosely bonded to her coworkers, the healer and his apprentice. The author lays out Merliss’s loyalties to the humans. But I still wondered why she bothered with them. In addition, most of her forest friends are ambivalent characters, mostly frenemies, but I suppose that’s a cat’s life.

An honest soul takes time to mature. More time than most have. They are difficult to find in the mortal world.

The book’s Wind in the Willows’ vibe should appeal to readers of animal based fantasy, such as the Redwall series and possibly Hollow Kingdom.